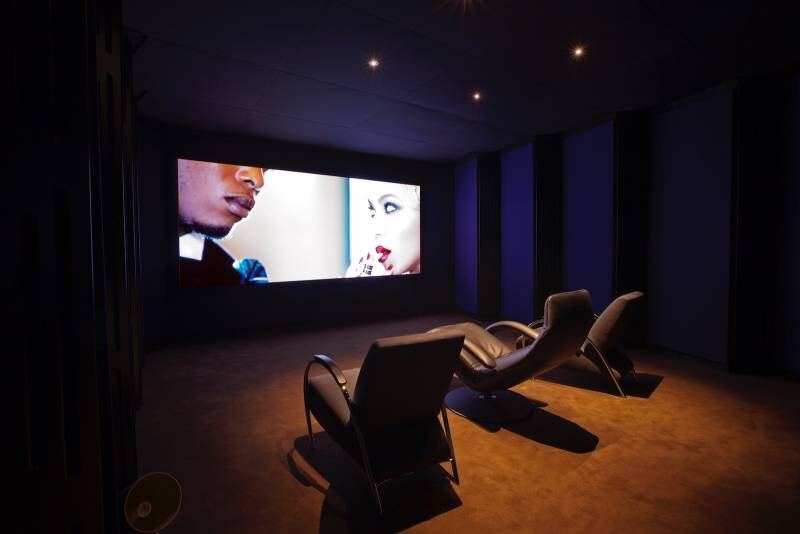 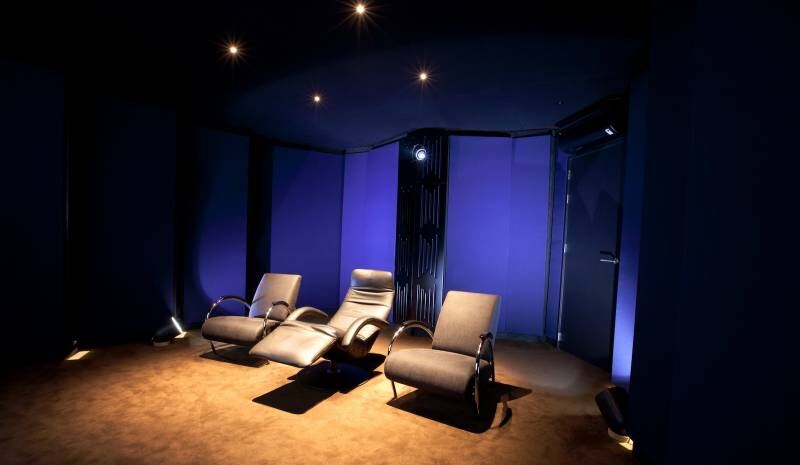 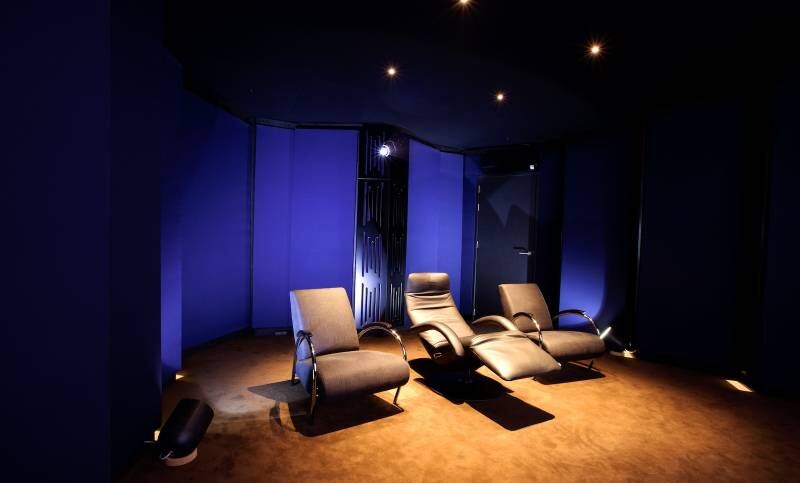 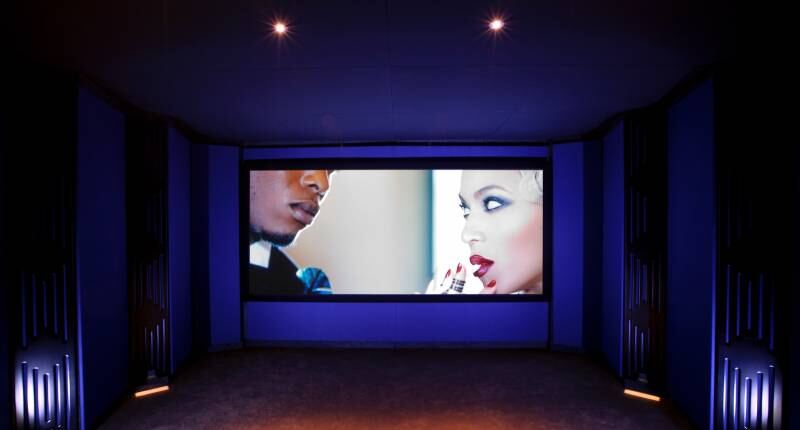 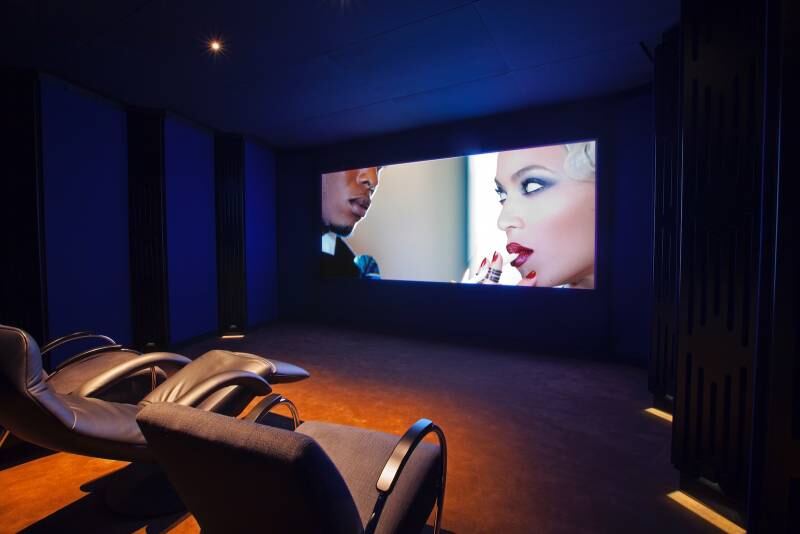 The lucky owner of this dream theater we have christened ‘The Blue Room’ – is a real movie buff. After a very decent first cinema room, he wished for an even more intense movie experience. To be part of the movie even more – away from reality – was the customer’s desire.

The lucky owner of this dream theater we have christened ‘The Blue Room’ – is a real movie buff. After a very decent first cinema room, he wished for an even more intense movie experience. To be part of the movie even more – away from reality – was the customer’s desire.

Lets go back in history... The earlier room mentioned was also partially realized by Beter Beeld & Geluid. It began as a garage and was rebuilt into a home cinema. Some very respectable brands were used, among them B&W 800-series loudspeakers, Arcam surround processing and JVC projector. Especially after the acoustics had been improved considerably, the real enjoyment started. Even then, there was an urge for more... When the possibility presented itself to rebuild the garage into a home office and a new bigger home cinema, the owner did not hesitate.

It was obvious that in the existing home cinema, acoustics were playing a mayor role in the total movie watching experience. Together with the customer, an appointment was made with acoustic specialists from Mutrox, who have been a reliable partner of Beter Beeld & Geluid for years now.

The acoustic treatment for the new room was built to completely merge with the total design and to not disturb the movie experience in any way. Together with Mutrox a bespoke design was made to reduce the reverberation time of the room to Dolby levels over the complete frequency spectrum. By optimizing the shape of the room, the first and second order reflections of every loudspeaker were treated in the process.

For the three JBL Synthesis front channels a baffle wall was designed and built, to enable a resonant free environment for the speakers behind the 140” Screen Excellence projection screen. The four bipolar surround loudspeakers were built into the newly constructed false walls of the acoustic environment to completely blend both visually and aurally into a completely holographic surround bubble.

The reverberation time of the new home cinema is an ideal 0,3 seconds over the complete mid- and high ranges of the spectrum, with a controlled increase of the reverberation time towards the lower frequencies. Immediately noticeable in the sound of the room are the complete homogenity between the different channels and the dynamic range of the sound system within the room. Its phenomenal!

TECHNICAL SPECIFICATIONS OF THE BLUE ROOM – JBL SYNTHESIS ONE ARRAY

For ‘The Blue Room’ loudspeakers from JBL Synthesis were chosen. Three SAM1HF/SAM2LF actively filtered loudspeakers make up the front channels, combined with two S1S-EX 18” subwoofers and S4Ai surround loudspeakers in bipole mode for the side and rear channels. The front LCR and surround speakers are driven by Mark Levinson and the subwoofers by Emotive power amplifiers.

The heart of the system is formed by the JBL Synthesis SDEC4500P digital eq / SDEC4500X active crossover. Every JBL Synthesis system is calibrated with ‘ARCOS’ (Adaptive Room Correction and Optimization System) – one of the most sophisticated room correction systems in the world, combining the vast knowledge of Harman technicians. This creates a room that has not only been optimized acoustically, but electronically as well.

ARCOS really is state of the art and creates a perfect acoustic match of all the loudspeakers for a very holographic effect. 8 Calibrated microphones are responsible for this spectacular result. A Marantz surround processor and Emotive power amplifiers were already in possession of the client and were re-used in the system.

A clear wish from the customer was to have a perfect match between the sound and the visuals. To balance the sheer vastness of the front sound stage with the image, a 140” 21:9 Screen Excellence acoustically transparent screen was chosen in combination with a Sony VPL-VW500ES 4K SXRD projector already owned by the client.

Only when no speakers are visible in a home cinema room and it is completely darkened, all the attention will go to the image. Combined with the sound coming from the correct position on the screen, this results in the optimal emotional engagement with the movie.